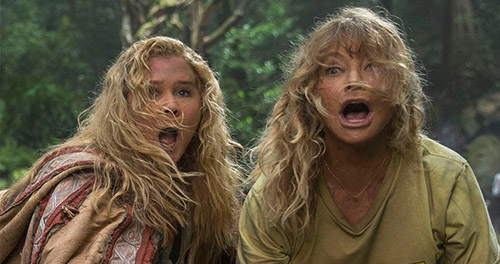 Amy Schumer and Goldie Hawn star as a mother and daughter who get kidnapped while on vacation in Ecuador. While they try to find their way to the safety of the American consulate in Bogota, they reconcile many years of estrangement. The situation itself isn’t funny, but the reactions from Schumer and Hawn are supposed to be. I love both these ladies, but they can’t save Snatched from mediocrity.

Schumer makes the most of a few scenes that clearly feel improvised — including an early scene in which she tries to stop her boyfriend from dumping her. The script gives her a few other nice moments, including a wandering boob during a drunken stupor and a doctor’s attempt to pull a tape worm out of her mouth.

Hawn, unfortunately, is stuck in the role of anxious, worried mother and gets no memorable moments of her own. The wonderful Wanda Sykes and Joan Cusack are thrown into a few bizarre supporting roles that never add up to much. Christopher Meloni also appears as an adventurous rescuer whose existence in the film is ultimately for a sight gag.

Snatched tries to be a comedy with heart, but the laughs are too few and far between, and the mother/daughter bonding stuff feels forced at best. With a leading and supporting cast this amazing, it’s hard not to be disappointed with the outcome.