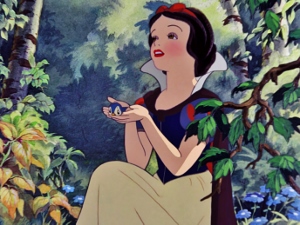 The world’s first animated feature film holds up pretty well, even if feminism has rendered its heroine somewhat outdated. Snow White herself is a little annoying, not only because she sits around waiting for her “prince to come”, but also because Adriana Caselotti’s voice is so darned squeaky. But I enjoy the darker aspects of the film, including Snow White’s fear-induced flight through the forest and all the scenes featuring her wicked stepmother, the queen. The soundtrack features a handful of endearing Disney classics, including “Whistle While You Work”, “Heigh Ho”, and the aforementioned “Some Day My Prince Will Come”. If you put Snow White in the proper context, through the prism of time and social change, she may still indeed be the fairest of them all.

Honorary Academy Award: For recognition as a significant screen innovation which has charmed millions and pioneered a great new entertainment field (one statuette – seven miniature statuettes)