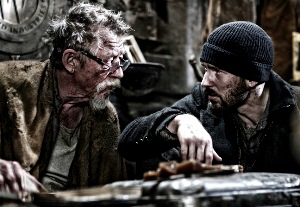 South Korean director Bong Joon-ho (Mother, The Host) directs this tale of class warfare set in an ice-age Armageddon wherein the last few living humans reside aboard a technologically advanced train that constantly circumnavigates the globe. Chris Evans (Captain America himself) stars as the working class hero who rises up against the train’s cold-hearted aristocracy, leading a revolt from the train’s back end slave quarters to the posh and privileged front end, where both the engine and its creator are deified. It’s a simple story and the allegory is completely transparent, but Bong and his co-screenwriters mine it for surprises you might never see coming — some are truly quite shocking, giving Evans the opportunity to show some acting chops he’s never had a chance to show us before now (and it’s always nice to know a sexy slab of beef can act, right?) The supporting cast is pure gold. Tilda Swinton puts in a terrific, madcap performance as a speaker for the well-offs, while Ed Harris portrays the mysterious train creator with a menacing nonchalance. Jamie Bell, John Hurt, Kang-ho Song, and Octavia Spencer round out the notable cast. Snowpiercer has it all — action, drama, character, suspense, horror, beautiful cinematography and music, and a distinct directorial style. I fell more and more in love with it as it unfolded. I highly doubt I will see a better movie at the multiplex this year.

A top-notch cast for a top-notch action/sci-fi flick.