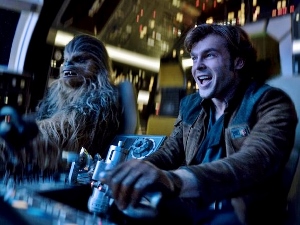 After the polarizing (and frankly great) The Last Jedi, and the almost insufferable Rogue One, I wasn’t quite sure what to expect from another Star Wars movie. But I was excited about the casting of Alden Ehrenreich as Han Solo, because his performance in the Coen Brothers’ Hail, Caesar is one the most charismatic turns I’ve seen at the movies in many years. And when Ron Howard took over the problematic production from fired co-directors Phil Lord and Christopher Miller (still onboard as executive producers), that got me excited, too. Lord and Miller seemed like idiotic-as-fuck choices to me, and Ron Howard is probably the single-most reliable director alive today. The movie also had Donald Glover as Lando Calrissian going for it — that guy blew me away with his small part in Magic Mike XXL. So the ingredients were all there and I was pretty optimistic!

The results are… all right. Solo: A Star Wars Story shows us how young Han Solo escaped Correllia, fell in love with a  dame (Game of Thrones‘ Emilia Clarke), met Chewbacca and Lando, and acquired the Millennium Falcon. He learns not to trust people from the likes of characters played by Woody Harrelson and Paul Bettany, and he proves his worth during a re-enactment of the Kessel Run (fanboys know what I’m talking about, but I’m not enough of a fanboy to know if I’m spelling ‘Kessel’ correctly, and I don’t care). It’s not a big battle kind of movie like shitty Rogue One, and nor is it rewriting canon like the brave and inspired The Last Jedi. It’s kinda just another Star Wars movie. And I thought it might take longer to get to that point in Disney’s acquisition of the franchise. It’s not bad — it’s completely worth seeing. But it’s one of those movies about which I think first and foremost about the missed opportunities.

I’ll stand by my glowing impression of Ehrenreich as an actor, but he’s not given a chance to shine here. The character isn’t written that well. And I’m shocked to say that, considering Lawrence Kasdan co-wrote the movie (big fan of Kasdan’s since his original involvement with The Empire Strikes Back). The Coen Brothers would let Ehrenreich’s face fill the frame, lingering on it for long takes — and he was mesmerizing. In Solo, he rarely gets a close-up. It’s as if everyone’s trying to hide the fact that Ehrenreich is even in the movie. Did they listen to the bitchy fanboys and get cold feet about his casting? If so, that’s a shame.

Second big missed opportunity: Why isn’t this movie a Han and Chewie buddy movie? It has a few moments of the two characters interacting, but like in The Last Jedi and The Force Awakens both, Chewbacca is treated more like a prop than a living, breathing, feeling character. I should maybe give Solo a little more credit than those other two movies — but considering this movie is an origin story, I expected way, way more human/wookiee bromance. It could have single-handedly turned this into a great flick.

Third and final missed opportunity: I know digital cameras have come a long way and cinematographers don’t have to light things as much as they used to, but… couldn’t they use a key light just ONCE in this movie? DP Bradford Young is apparently a big believer in natural light and backlighting — to the point where you don’t even get a good look at Ehrenreich’s facial features until twenty minutes into the movie, and after that people are in silhouette approximately a third of the time. Maybe it was an aesthetic choice. Maybe it was a scheduling measure. Either way, it bugged me all through the movie that I couldn’t see people’s faces as clearly as I wanted to.

I do hold Star Wars to a higher standard than most other tentpole event movies. That’s why I bitch — it’s out of love! But now I’ll say a few nice things: Whoever staged and choreographed the train heist sequence is fucking brilliant — that’s the best action sequence in the whole film, and much more elegantly done than anything in shitty fucking Rogue One. Donald Glover is indeed very, very good as Lando Calrissian. John Powell’s score was pretty decent. And there’s at least one big fanboy orgasm moment in the movie — but you’ll have to see it to find out what it is.

That’s about it. So, yeah. Solo. Another Star Wars movie. If they make a sequel, I think they may hit their stride.

With Thandie Newton. See if you can spot Warwick Davis and the voice of Linda Hunt.