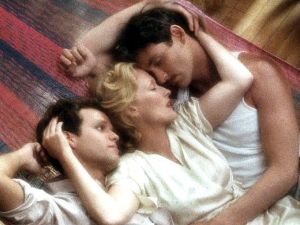 Meryl Streep snared the best actress Oscar for her disarming performance as a Polish refugee forced by a Nazi soldier into one of the cruelest scenarios a mother could imagine — choosing which of her two children will die. The Auschwitz scenes, which unfold via flashback, are probably the most memorable ones in Sophie’s Choice, but I was equally (if not more) enthralled by the present-day storyline. The precarious friendship that blossoms among the three main characters is powerfully tragic stuff. Kevin Kline (in his big screen debut) is amazing as Sophie’s passionate lover, Nathan, whose paranoid schizophrenia threatens the happiness of all three friends. I was impressed with how much humor Kline was able to find in the role — a welcome contribution to an otherwise intensely serious drama. Nathan and Sophie have high highs and low lows, both trying desperately to enjoy life to the fullest, even in the shadow of inescapable self-fulfilling prophecies. Caught in the fray is Peter MacNicol, playing a young author who fast becomes their best friend.  He’s our window into the story, one of secrets, lies, guilt, passion, and losing all control. The film runs a bit long at two hours and thirty minutes, but the dual storylines and the confusing intimacy among the three main characters makes it very worthwhile.