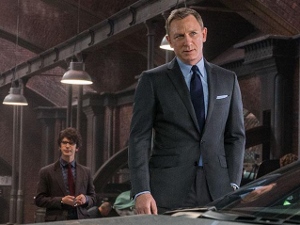 James Bond returns for the 24th official time in Spectre. Know right away that this is not Skyfall. We were lucky to get a Skyfall — shit like that comes around in a franchise once a decade or two if it survives reinvention. Where Skyfall had the opportunity to mine a little backstory and emotion (thank you, Ms Dench), Spectre is a full-blown return to form. Exotic locations, sexy Bond girls, cool gadgets and cars, and dashing Bond front and center of it all. Daniel Craig carries his fourth film in the series reliably well and Christoph Waltz is a natural choice for a Bond villain. The action set pieces are exciting, the supporting cast (Ralph Fiennes, Ben Whishaw, and Naomie Harris as M, Q, and Moneypenny, respectively) have all settled into their stewardship of well loved characters, and composer Thomas Newman isn’t afraid to blare the famous James Bond theme from time to time.

In many ways, Spectre feels like a bath in nostalgia for long-time fans. Locations and specific sets will remind you of films that have come before — I was flashing On Her Majesty’s Secret Service and Octopussy, in particular. The main plot is unabashedly a return to key concepts put into play in 1963’s From Russia With Love. Old villains and conspiracies are new again. And you know what? It works. It’s not groundbreaking. It’s a James Bond film. And I need one of those every couple of years. People who only know the franchise from the Daniel Craig entries might be disappointed, but only because Skyfall and Casino Royale are so damned good. (We shall not speak of Quantum of Solace.) Long-time fans, on the other hand, should find it a worthy entry in the series.