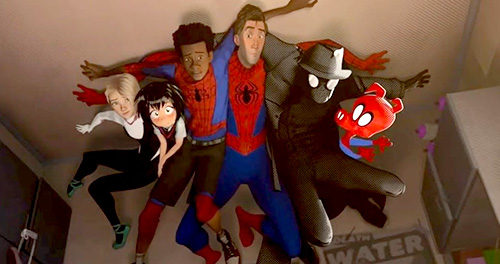 New York teenager Miles Morales (Shameik Moore) is bitten by a radioactive spider and begins developing powers just like Spider-Man. He meets the real Spider-Man (Chris Pine) during an encounter with a villain named Kingpin (Liev Schreiber), who is using a giant machine to mess with the space-time continuum. Spider-Man gives Miles an order to destroy the machine just before he’s killed by Kingpin. As Miles mourns the loss of his would-be mentor, fate sends him another one — older Peter Parker (Jake Johnson), from another dimension. Turns out the space-time continuum is already screwed up, and it has sucked Spider-Mans from other dimensions into Miles’ reality. Miles and older Peter team up with four other Spideys to send everyone back to their own dimensions… and save Miles’ world.

Into the Spider-Verse is an ambitious story that sets up a lot of new characters and situations in the Spider-Man universe. The writers do a great job doling out exposition that could easily have bogged the movie down. It’s unusual for a film this plot-driven to develop characters worth caring about. It succeeds in making Miles and old Peter engaging characters. The two of them have approximately a third of the movie to themselves and that’s my favorite third — the adventures of the eager apprentice and the jaded mentor. Miles’ father (Brian Tyree Henry) and uncle (Mahershala Ali) also pop out of the narrative indelibly.

The other Spidey variants get short-shrifted in screentime, but I’m sure they’ll figure more prominently in sequels (and there will be sequels). I was especially keen to know more about Spider-Man Noir (Nicolas Cage), a black-and-white Spidey from the 1940s, and Spider-Ham (John Mulaney), a cartoon pig in a spider-man suit. Ladies can be Spider-Man now, too, with Spider-Gwen (Hailee Steinfeld) and Penni Parker (Kimiko Glenn) bringing girl power to the proceedings.

Into the Spider-Verse has a distinct, unusual aesthetic that we’ve never seen before. Character shading is done in clusters of dots to emulate the look of old comic books. The animation is rendered in an unusual way, with every other frame being copied instead of animated — it gives the animation a jagged, jerky movement. The filmmakers did it to, again, emulate comic books. The jerky animation only disturbs my eyes, though. I like the character designs and overall color schemes — but I wish the movement was more fluid.

The film has plenty of whiz-bang action sequences. I know people love that shit, but it’s not why I liked this movie. I liked it because it musters a handful of genuine emotional moments. Miles’ relationships with his father figures — his actual father, his uncle, and old Peter Parker — are the heart of the film, and on that measure it’s a good coming-of-age movie. Given the fact we now have multiple Spideys and access to other dimensions, it’s also a film with rich sequel potential. We’ll find out soon enough!