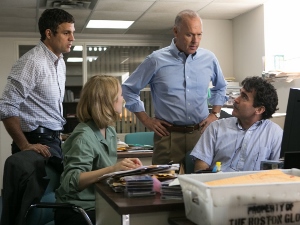 Tom McCarthy (The Station Agent) cowrites and directs this true story of a Boston investigative newspaper team who expose the Catholic Church for covering decades worth of pedophilic activity by over 87 priests in the city. Spotlight‘s not a sentimental movie about the actual crimes being committed, though you will see some survivors talk about their painful memories. The film centers squarely on the investigative team and their years’-long effort to verify their claims. It’s not any more exploitive or emotional than that — but it was far more engaging than I anticipated. I think I have fast pacing and a notable cast to credit. Michael Keaton, Mark Ruffalo, Stanley Tucci, and Liev Schreiber each have moments to shine in the largely plot-driven narrative. Rachel McAdams and Billy Crudup also appear. Best Picture of the Year, though? I’m not so sure.