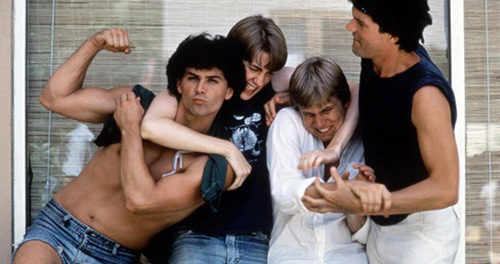 Two kinda dorky college boys end up sharing a room with two more savvy guys during spring break in Fort Lauderdale, Florida. The guys become friends in their pursuit of beer and women, all while one boy’s politician step-father hunts him down for fear of bad press.

As far as ‘horny vacationing student’ movies go, you could do better or worse than Spring Break, written and directed by Sean S. Cunningham (Friday the 13th). It’s better than worse films of its kind by keeping the plot fairly loose and by employing a cast who seem keenly aware of what kind of movie they’re in. None of them are especially well known, but they seem to be having fun in front of the camera, and that’s important for a party movie. A little more personality, better jokes, and, yes, more skin would have helped Spring Break stand apart from the pack.

Spring Break is best when it’s documenting group fun — perhaps most so during a wet T-shirt contest that refreshingly spotlights both women and men. It gets a little too plot-driven and maudlin as it goes, but if all you need is another beer-and-boobs party movie, Spring Break just might suffice.