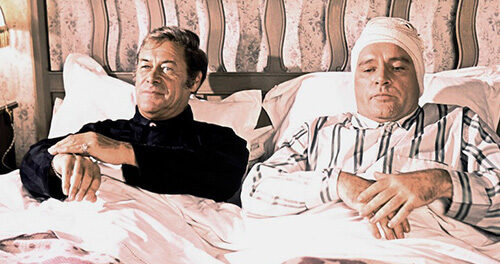 Rex Harrison and Richard Burton star as aging gay lovers in this stage play adaptation directed by Stanley Donen (Singin’ in the Rain, Seven Brides for Seven Brothers). The two men have been together for twenty years and work together as hairdressers in London’s west side. The romance, if there ever really was one, has gone out. Harrison takes his fear and apprehension about a pending court trial (for wearing drag in public) out on Burton, and Burton’s balding character takes his insecurities out on Harrison.

Staircase could be criticized as two hours with two bitchy queens, but playwright/screenwriter Charles Dyer gives us explanations for their bad behavior, and as a result, we do come to care for both men. For the film version, I would have considered injecting some secondary characters for the two men to interact with. Without any outside interference, the film becomes a vicious cycle of Harrison and Burton fighting, then making up, fighting, then making up.

Harrison has a natural charisma in everything he does, but in this role he camps it up a bit too much at times. Burton, on the other hand, is marvelous. Whereas Harrison’s performance vacillates between snarky and fearful, Burton manages to keep his performance working on multiple levels most of the time. You see his courage in standing up to Harrison, but also an underlying vulnerability. I’ve never seen this side of Richard Burton before, and it’s a real treat — my primary reason to recommend seeing Staircase.