Rob Reiner (This Is Spinal Tap, The Princess Bride) adapts this dark coming-of-age tale from Stephen King, about a band of four boys who embark on a weekend journey to find the body of a missing teenager. Stand By Me is the best film of Reiner's career, and the best film adaptation of King's work. It's a moving, hauntingly nostalgic piece, bolstered with healthy doses of good humor and some of the best adolescent performances ever put to film. 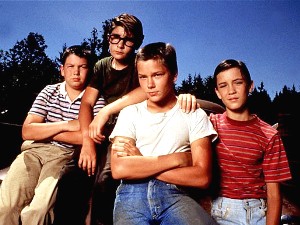 Will Wheaton stars as Gordie, the ‘smart’ kid whose family is still reeling from the death of his older brother (John Cusack, seen in several flashback scenes). Corey Feldman plays the ‘messed-up’ kid, the son of a man with known mental illness, and Jerry O’Connell makes his screen debut as Vern, the ‘goofy’ fat kid (though O’Connell eventually shed the pounds and put all his costars to shame!)

The truly stunning performance, however, comes from River Phoenix as Gordie’s best friend, Chris Chambers. Chris is a truly good-hearted kid who can’t get out from under the shadow of his family name. The late-night scene where Chris breaks down in front of Gordie about the time a teacher betrayed his trust is a gut-wrenching one, paving the way for Phoenix’s Oscar nomination a few years later (for 1988’s Running On Empty). Phoenix’s death in 1993 makes the conclusion of Stand By Me eerily prescient and upsetting.

Kiefer Sutherland is imposing as the leader of a gang of older kids who antagonize Gordie and his friends, while Richard Dreyfuss plays a much older version of Gordie at the beginning and end of the movie. Dreyfuss narrates the film, delivering Gordie’s recollection of the story’s events. His last few lines are perhaps my favorite closing to any movie, beautifully distilling the bittersweet feeling that Stand By Me gives me every time I watch it.

“I never had any friends later on like the ones I had when I was twelve. Jesus, does anyone?”