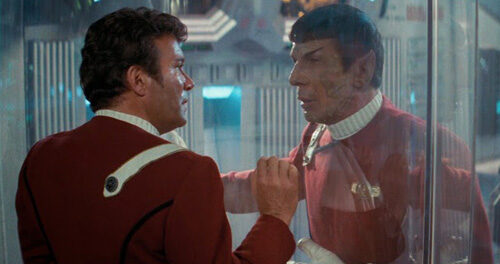 Captain Kirk (William Shatner), Spock (Leonard Nimoy), Bones (DeForest Kelley) and the rest of the Enterprise’s bridge crew return in this sequel that better captures the spirit of the original TV show than the previous feature film. Khan Noonien Singhe (Ricardo Montalban), who was exiled by Kirk in one of the TV episodes, returns with a vow of vengeance on the man who left him to suffer in isolation on a desolate wasteland planet for decades. When Khan learns about a new terraforming technology called Genesis, he tries to obtain it for use as a weapon of mass destruction.

The Wrath of Khan is much more character-driven and full of personality than the drier, more conceptual The Motion Picture. We get our much loved friendly banter between Kirk, Spock, and Bones, and there’s added drama from the introduction of Kirk’s old girlfriend (Bibi Besch) and their son (Merritt Butrick), both responsible for the creation of the Genesis project. Montalban steals the show in his villainous, theatrical performance, and the story gains a lot of dramatic heft in its final act when one of the series’ most beloved characters risks their life to save the others.

Director Nicholas Meyer (Time After Time) does a spectacular job building suspense out of two adversaries, Kirk and Khan, who never share a moment on-screen together. Instead their two spaceships are engaged in a game of cat and mouse, hiding out in clouds and trying to launch surprise attacks on one another. It’s like a WWII submarine battle in space. Meyer also helps Shatner give his finest performance, and is responsible for production design and wardrobe changes that have remained with the series ever since. James Horner’s dynamic, sweeping score enhances the drama, mystery, and excitement — one of the best scores from the 1980s.