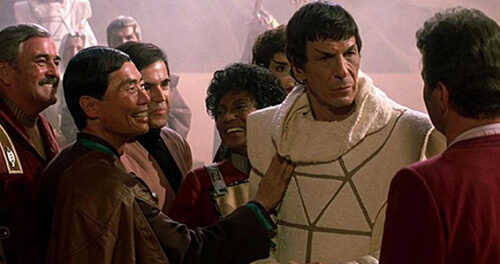 Spock himself, Leonard Nimoy, jumps into the director’s chair for The Search for Spock, which picks up immediately after the events of The Wrath of Khan. When Kirk (William Shatner) learns that Spock’s soul has been transferred to McCoy (DeForest Kelley) and that his body has been regenerated on the newly-formed Genesis planet, the Enterprise crew decide to risk everything to make Spock whole again. Along they way, they defy the Federation by stealing the Enterprise out of dry-dock and battle a ruthless Klingon commander (Christopher Lloyd) who wants to steal the Genesis technology for himself.

The Search for Spock may not be as action-packed as The Wrath of Khan, but it makes up for it in character and feeling. As McCoy, Kelley gets to play a man having a schizophrenic breakdown, having both his and Spock’s consciousnesses together in one body. The film also makes Uhura (Nichelle Nichols), Sulu (George Takei), and Chekov (Walter Koenig) more heroic than they’ve been in the films thus far. Christopher Lloyd makes for a terrific Klingon adversary, and Mark Lenard is memorable as Sarek, Spock’s stoic father.

My favorite sequence is the stealing of the Enterprise. I love watching all the characters conspiring to break the law and rescue Spock. It’s sort of a ‘hell yeah’ moment, and one that certainly isn’t lost on returning composer James Horner. I also enjoyed the little semi-erotic moments when Lt. Saavik (Robin Curtis) helps young Spock through a painful… well, sexual awakening.

There’s a death scene that should probably have greater dramatic bearing on the story, but The Search for Spock is a success overall. It brings Spock back to life in a way that doesn’t strain my suspension of disbelief, and it ends in such a way that the sky is the limit for future sequels.