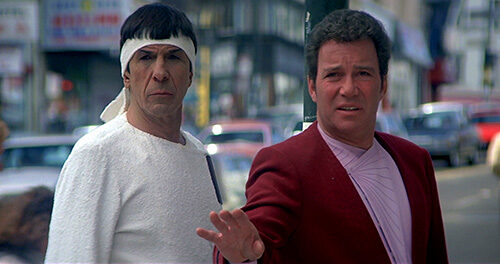 After dealing with the death and resurrection of Spock in the previous two films, director Leonard Nimoy was given free reign with the fourth entry in the Star Trek franchise. Nimoy decided it was time for the series to take a breather — to show its lighter side and let the characters shine. With a script co-written by Nicholas Meyer (Star Trek II: The Wrath of Khan), The Voyage Home sees the crew of the Enterprise going back in time to retrieve two humpback whales from captivity in 1986 San Francisco so that they can communicate with a mysterious and deadly probe that is calling to them in the 23rd century — when humpbacks are extinct.

I applaud Nimoy for incorporating environmentalist and animal rights issues into the film without being too heavy handed. It’s also interesting to note that this is the first Star Trek film without a traditional bad guy. Instead, the threat comes from mankind’s present disregard for its environment. By killing the whales, we are essentially killing ourselves 300 years down the line. Nimoy’s decision to involve whales in the film is a stroke of genius. Whale song is fascinating and mysterious, and that it might be extra-terrestrial in nature or provide the key to our future salvation — these are truly inspired concepts.

The Voyage Home is the most popular and financially successful Star Trek film in the franchise’s long history. Even people who didn’t like Star Trek saw and enjoyed the movie. The film’s ‘fish out of water’ component is thought to be the primary reason. Seeing Kirk, Spock and the crew interacting with present-day San Francisco brought a lot of laughs — perhaps most notably when Spock gives the Vulcan nerve pinch to an unruly punk on a public bus. Some die-hard Trekkies poo-poo The Voyage Home for being too populist and comedic. I think it’s a terrific opportunity to remind us that these characters and the franchise are not without a healthy sense of humor.

Catherine Hicks is memorable as a marine biologist who helps the crew after overcoming her incredulity. Mark Lenard and Jane Wyatt have good moments as Spock’s parents, Sarek and Amanda. James Doohan, as Scotty, steals the show for me after he beams the humpack whales aboard the ship and then reports to Kirk, “Admiral… There be whales here!”