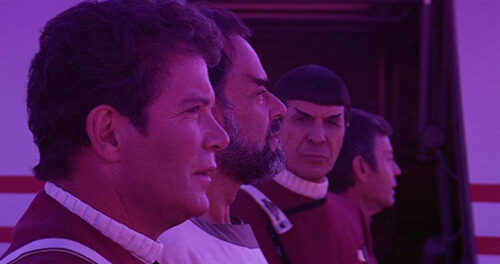 When it was William Shatner’s turn to spearhead a Star Trek movie, he wanted it to be about a search for God in which God turned out to be the Devil. The studio let him have his way, and Star Trek V: The Final Frontier ended up under-performing during the crowded summer of 1989 (when Batman and Indiana Jones slayed at the box office). I think a lot of The Final Frontier‘s problems lie in that core concept of Shatner’s. Once you say you’re a journey to find God, you start setting up some wild expectations in the audience’s imagination — expectations on which you can’t possibly deliver.

That said, though, Shatner does a great job directing the movie. He has a good eye for staging action and shot composition, and makes a lot of great decisions in the casting and crewing of the film, most notably in a great supporting performance from Laurence Luckinbill and the return of composer Jerry Goldsmith. There’s visual majesty in some of the location photography, which includes Yosemite National Park and some eerie desolate wastelands.

The visual effects are tragically underwhelming and the last act is rushed, but The Final Frontier succeeds in keeping its beloved characters front and center. The camping scenes with Kirk, Spock, and McCoy are charming, and when Luckinbill’s cult/prophet character forces the three men to face their greatest fears, the actors get a chance to deepen their performances.