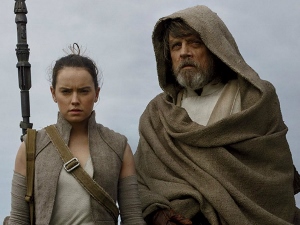 Writer/director Rian Johnson (Brick, Looper) picks up the reigns and steers the franchise into bold, new waters with an entry that summons Star Wars fans to let go of the past and wipe the slate clean, so that something new can begin to grow. After the fan-pandering Episode VII, something new and unpredictable was exactly what I craved in a Star Wars movie. Johnson has delivered the goods in spades.

Episode VIII begins with General Leia’s (Carrie Fisher) rag-tag Resistance being pursued across the galaxy. The fleet is getting smaller and smaller over the course of the film, to the point where the flame of rebellion is reduced to a single imperiled spark. While Rey (Daisy Ridley) is off on a rocky island trying to coax a very retired and reluctant Luke Skywalker (Mark Hamill) back into action, her friends Finn (John Boyega) and Po (Oscar Isaac) wrestle with Leia and another Resistance leader (Laura Dern) about the best way for the Resistance not to win the war, but to survive in any shape or form.

The Last Jedi is exciting because it’s unpredictable. There’s great action, drama, and suspense at play here. Even the comedy landed well with me, Porgs and all. There are ‘hell, yeah!’ moments to cheer, surprises to process, and yes, moments to mourn. Mark Hamill gives the finest movie performance of his career as the world-weary Luke. Carrie Fisher thankfully has more to do here than she did last time, but I wish there was more. (I’m sure we all do.) The standout is Adam Driver as Kylo Ren/Ben Solo. As a character caught between the light and dark sides of the force, Driver gives his character both a compelling vulnerability and an air of constant danger.

What I love the most about The Last Jedi is that it’s the most philosophical and relevent Star Wars movie to date. At one point, Leia sends out an S.O.S., a final call to action for anyone who believes in the Resistance, to join the fight or watch the spark of hope be conquered by darkness forever. And no planet responds. No race. No army. No city. No organization of any kind. I could not help but transpose Johnson’s story over the political backdrop of 2017, and how voter apathy resulted in the darkest days of my political life. I don’t think it’s coincidence that the Resistance is full of people of color, or that its leadership is overwhelmingly female, that the casino planet scenes are making a salient comment about the super-rich 1%, or that there’s a shade of toxic masculinity lovingly addressed in the Po Dameron character. This Star Wars, more than any other, is about here and now.

If you’re a die-hard fan who lives and breathes trivia and derives enjoyment in speculation and prediction about the franchise, you might be deeply disappointed by the movie. Episode VIII had me thinking of the stark contrast between Frank Herbert’s Dune and all the rest of the books in that series. Like Star Wars, the first Dune is about religion and destiny — things largely out of our control, things that allow us to shrug personal responsibility and put our faith elsewhere. Luke Skywalker in Episode VIII functions much like Paul Atreides in the books after Dune. Both characters contributed to a cultural, religious phenomenon and were exalted by their respective societies. Yet both are mere men — flawed and dangerous. Both characters rail against their canonization and almost end up the enemy of their faithful followers.

As much as I have loved black-and-white stories of polarized good and evil, I tremendously admire what Frank Herbert did and what the Star Wars franchise is now attempting to do. We live in a world where people cling to old ideas and wait, inactively, to be saved. Star Wars Episode VIII: The Last Jedi asks us not to put anyone or anything on a pedestal, to stop placing our hopes and dreams outside of ourselves, to take responsibility for our action (or inaction). Watching the franchise get deconstructed can be alarming at first, but ultimately rewarding. Because the ‘good and evil’ paradigm isn’t just tiresome — it’s no longer applicable. Star Wars, one of the most valuable franchises that ever existed, owned by a communications empire driven beyond all else to make money, is taking chances. For once in forever, a major motion picture isn’t a tired reflection of audience expectation. It’s attempting to steer the culture in a positive direction by building new myths that better fit our complicated times.

This Star Wars is trying to be more than entertainment. It’s trying to make the world a better place, and I find that to be more brave and noble than any Jedi Knight ever was.