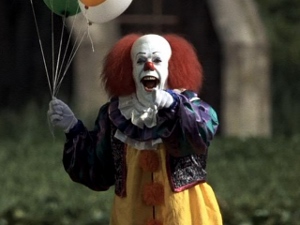 Seven adults are called together to vanquish a demon clown they defeated as children thirty years ago. This three-hour miniseries based on Stephen King’s beloved novel is directed by Tommy Lee Wallace (Halloween III: Season of the Witch) and features TV stars John Ritter (Three’s Company), Harry Dean Anderson (Night Court), and Richard Thomas (The Waltons), along with Annette O’Toole, Tim Reid, Dennis Christopher, and Richard Masur. The mini-series spends almost equal time in flashbacks with the child cast, which includes Jonathan Brandis (Seaquest DSV) and Seth Green. Cult icon Tim Curry (The Rocky Horror Picture Show) plays the evil clown Pennywise. Like many Stephen King film and television adaptations, It has a wonderful set-up, memorable characters, and some chilling atmosphere. And like many King adaptations, it kinda falls apart in the third act. I’ve never read the novel, but I was unclear as to the difference between Pennywise and It (if any), and why It/Pennywise manifested as different things to different people at convenient times. In other words, the rules of the game just weren’t spelled out too clearly. But the cast and characterizations carry the piece, and the fizzled firework of an ending doesn’t sour the whole experience too badly. I sure wish Tim Curry had more screen time — he manages to be quite chilling a few times.