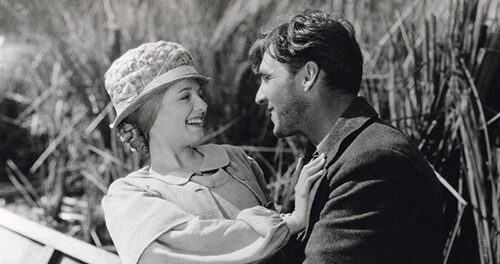 Some of the most enduring films from silent cinema were directed by F.W. Murnau (Nosferatu). One of those classics is Sunrise: A Song of Two Humans, about a man (George O’Brien) who is coerced by a lascivious city girl to kill his neglected wife (Janet Gaynor) so they can be together. The man tries to follow through with the plan while sailing with his wife on a trip to the big city. But after scaring his wife nearly to death, he can’t follow through with it. The two reconcile during their stay in the city, but a storm at sea on the way home that night threatens to kill them both.

It’s hard for me to get past the idea that our hero literally commits to kill our heroine in this movie. I love to see films that tackle domestic violence, but Gaynor’s character forgives O’Brien a lot more quickly than I ever could. In today’s politically-correct, female-empowered society, Sunrise probably won’t play as well as it did over 90 years ago. But if you can suspend your disbelief and take account of the increased level of sexism omnipresent when the film was made, Sunrise has a lot to offer.

The heightened drama makes the first third of the film pretty gripping. Like A Place in the Sun decades later, you’re on the edge of your seat wondering if the male character will go through with dispatching the female character. The second act stalls a bit, as the two reconcile and begin an episodic, over-joyous holiday in the big city. There is an infectious romantic quality about their happy scenes together — but only when you forget how close they came to murder earlier the same day! The third act attempts to rectify the questionable morality through deus ex machina — in the form of a storm that sweeps the lovers apart. O’Brien’s character wakes up ashore and the villagers join him in a search party for Gaynor. Does he deserve her?

I love moments in the performances, which suffer from overacting like most silent films do. The real strength of Sunrise is in Murnau’s sometimes poetic imagery and the cinematography by Charles Rosher and Karl Struss. Highlights include a scene of O’Brien wrestling with his dark decision, in which Murnau superimposes images of the city girl embracing him in a controlling manner. In another scene, Murnau places the lovers walking through busy city streets, lost in each others’ eyes to a point where they stop traffic for a kissing embrace.