In pre-World War II Florence, a group of elitist British dames and a garish American art collector take in a small boy and raise him. When Britain and America enter the war several years later, the young man returns the favor by looking after the women when they're interned by the Italian police -- and helping to smuggle one of them out of the country when her nefarious husband plans to hand her over to the Gestapo. Tea with Mussolini is a semi-autobiographical tale from director Franco Zeffirelli (Romeo and Juliet, The Taming of the Shrew). The script could have gained a stronger perspective by sticking more to the young man's point of view, but the sentiment comes across beautifully and I find it impossible to resist the cast of characters. 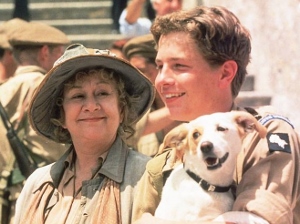 The colorful British women, known as the ‘Scorpioni’ (because “they bite”), are played by Maggie Smith, Judi Dench, and Joan Plowright. Smith is her usual, wonderful, sarcastic self — it may be nothing new, but I personally can’t get enough of it. Dench plays a goofy woman whose commitment to art is unparallelled, especially when the Germans threaten to destroy one of her favorite fresco murals. Plowright is the heart of the group, the one who first takes in young Luca (Baird Wallace) after his mother dies and his father re-marries. Then there is the vulgar American, played by Cher, an old friend of Luca’s mother and the object of Maggie Smith’s disdain. Lily Tomlin brings a little comic relief as an American archaeologist who mingles with the group.

All the women bring their A-game and poor young actor Baird Wallace has a hard time measuring up to them. While the real-life events that serve as the story’s backdrop are deadly serious, Zeffirelli gives the film a decidedly sweet, sentimental, and even comic tone. It’s especially wonderful to watch Maggie Smith dress down a Scottish general who attempts to relocate her. She responds, “The Germans and the Italians couldn’t get rid of us. There is absolutely no reason why we should surrender to the Scots.”

Bottom line: I love Maggie Smith. I love Joan Plowright. I love Cher. I love Judi Dench. I love Lily Tomlin. How could I not love this movie?