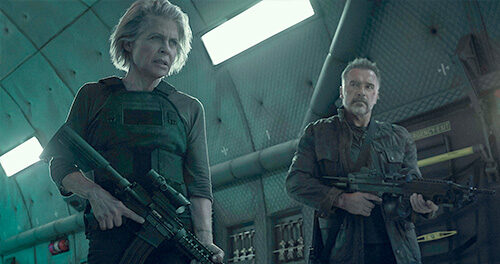 The impending apocalypse of Terminator and Terminator 2 Judgment Day was averted, but you can’t stop technological ‘progress’. Enter Terminator: Dark Fate, a direct sequel to the second film (ignoring two or three films in-between) that sets up a new cataclysmic countdown to doomsday, a new victim that needs saving, and a new savior sent from the future to protect tomorrow’s inspirational resistance leader. No, you can’t give Dark Fate a lot of credit for originality, but it’s still a fun, engaging, well-made popcorn action flick.

The real reason to see this new franchise installment is the return of Linda Hamilton, who hasn’t been part of the series since 1991. Hamilton’s character has resigned herself to slaying terminators for a living. When she meets an ‘enhanced’ woman from the future (Mackenzie Davis) who is trying to protect a teenager (Natalia Reyes) from being assassinated by the latest model of terminator (Gabriel Luna), she decides to join them. Along the way, Arnold Schwarzenegger also returns to the franchise — but I won’t say how because that’s part of the fun.

I was pleasantly surprised that Davis and Reyes’ characters aren’t two-dimensional or throwaway — I actually got a little attached to them. But it’s the reunion of Hamilton and Schwarzenegger that make this film worth watching. The characters have a history that makes their reluctant pairing worth exploring. Director Tim Miller (Deadpool) can’t match James Cameron’s action-movie panache, but who the hell can? He does a commendable job setting up action set-pieces and using scattered moments of humor for levity.

If you’re going to go back to the well time after time, the only way you can succeed is with personality. Dark Fate knows this and delivers this. I’m personally of the mind that the first two Terminator movies are grade-A classics that can’t be topped and don’t need to be. But if you absolutely had to make another Terminator movie after all these years, giving us an excuse to hang with Linda and Arnold again is the way to do it.