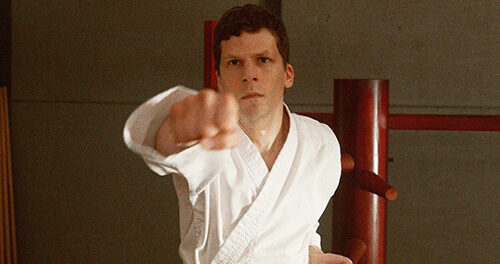 Jesse Eisenberg and Alessandro Nivola star in this pitch-black comedy about a socially awkward young man (Eisenberg) who joins a karate class after he’s assaulted in the street one night. His instructor (Nivola) is a curious character who at first inspires Eisenberg’s character to ‘man-up’ and take charge of his life. But as Nivola’s tactics become more questionable, Eisenberg starts to wonder if his long-suppressed rage is directed at the correct target.

The film is reminiscent of Fight Club in terms of story and sub-text, but is stylistically much more austere and direct. Eisenberg and Nivola do very well with writer/director Riley Stearns stilted dialogue, helping to give the film its own off-kilter but cogent reality. I enjoyed the first half of the film for all its simmering subtext about gender, bullying, and toxic masculinity. It was a joy not to know where the film was headed.

But some time after the mid-point, the film indicates where it’s going. And while it’s not the worst way to take a storyline, it just doesn’t live up to the promise of the film’s first half. The Art of Self-Defense is still worth a gander for a few absurdly dark and hilarious moments and the two lead performances, as well as Imogen Poots’ supporting turn as a female karate instructor whose career potential is stymied by male chauvinism.