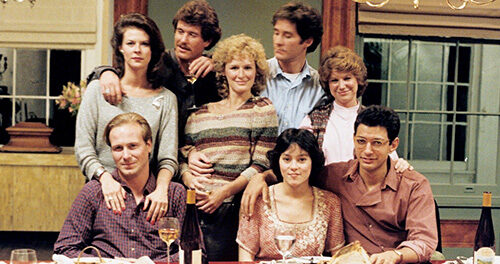 Writer/director Lawrence Kasdan (Body Heat, Grand Canyon) brings us this film about seven college friends who reunite for a weekend after one of their group commits suicide. The Big Chill is a fly-on-the-wall ensemble drama with a healthy sense of humor, a great soundtrack, and a rock solid cast.

Glenn Close and Kevin Kline play the couple hosting the gathering. Among their guests are Tom Berenger as an actor on a popular, cheezy TV show; William Hurt as a overthinking nomad with substance abuse issues; Mary Kay Place as a single woman desperate to have a baby; JoBeth Williams as an unhappily married mom of two sons; and Jeff Goldblum as a slightly selfish and annoying journalist. Also with the group is the deceased’s quirky, socially awkward girlfriend, played by Meg Tilly.

The film is essentially an exploration of our notions of personal success and progress. The characters wonder if they are living the lives their younger selves imagined or desired, and even question if their success is in line with their old hippie college-day beliefs. Hurt’s character at one point alleges that their reunion is only out of convenience. When he suggests that their camaraderie was never genuine, he elicits anger from some, but is reassured with love by others. The Big Chill is about group dynamics among friends, and how precious that dynamic becomes when we’re each thrust out into the real world to make it on our own. It’s about loneliness and togetherness, under the specter of someone who was once very much the life of the party, but who opted to take the ultimate lonely path.

Under Kasdan’s writerly expertise (cowriting with Barbara Benedek), the film holds together without becoming too preachy or poetic. As heavy as the circumstances are, the characters also manage to have a pretty good time. A few ticking-clock mechanisms keep the story from getting too aimless. Chief among them is Mary Kay Place’s decision to ask one of the men to help her have a baby, and JoBeth Williams and Tom Berenger’s mutual reluctance to consummate their long-held feelings for one another.

The performances are all so grounded and affecting, you feel like a voyeur watching The Big Chill. So sit back and join the group, smoke a little weed, eat some big meals, listen to some great old records, reminisce about the past, and try to make sense of life’s big mysteries for a few hours.