There's this thing called the "elasticity of human emotion", where the harder down you throw people, the higher up they'll rise. I haven't seen many movies demonstrate this principle better than The Color Purple.  Whoopi Goldberg plays Celie, who we see having two children by her own father before being married off to Mister (Danny Glover), who beats her and convinces her she is ugly. The only person who ever loved her was her sister, Nettie, who Mister banishes from Celie's life in more ways than one. Her children long since taken away and her sister gone, Celie is one heck of a tragic character. But out of her shame and despair there grows a sense of pride. Her transformation is a powerful one that gives the story universal appeal -- who hasn't felt ugly and unwanted in their lifetime? 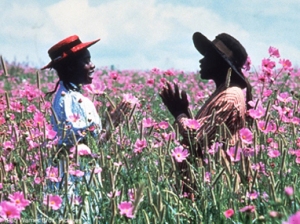 The screenplay by Menno Meyjes captures the essence of Alice Walker’s Pulitzer Prize winning novel, but Spielberg’s vision is decidedly more picturesque than Walker’s.  The Color Purple is gorgeous to look at, almost too gorgeous — as though Spielberg is trying very hard to make something dark and frightening more palatable. The cinematography is lush and saturated, the sets and wardrobe are exquisite, and Quincy Jones’ music tugs wonderfully at the heartstrings.

I don’t mind the romantic approach to this subject matter.  I think the women in The Color Purple experience such darkness, that whatever beauty they can find becomes vital to maintaining their faith, the kind of faith that lends credence to the “elasticity of human emotion”. I think the meaning behind the title says it all. While Celie and her husband’s mistress (Margaret Avery) go walking at dusk one afternoon, Shug says, “I think it pisses God off if you walk by the color purple in a field or somewhere and don’t notice it.”

The film was nominated for 11 Academy Awards, including best picture, best actress for Whoopi Goldberg, and two supporting actress nods for Margaret Avery and Oprah Winfrey (Winfrey is incredible here).  Unfortunately, Spielberg reportedly said some things that alienated the Academy members, crippling the film’s chances for Oscar gold.  In a huge upset, it won not a single trophy.