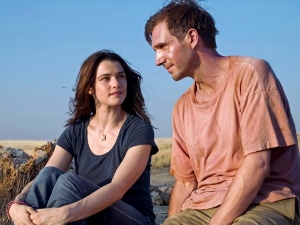 A British diplomat in Kenya tries to solve the mystery of his activist wife’s murder, only to get in over his head with the culprits — a pharmaceutical company that is intentionally poisoning and killing people. The first third of the film belongs to Rachel Weisz, who plays the deceased wife in a series of flashbacks. Weisz took home the Oscar for best supporting actress for her portrayal. The film then gets a bit shaky when it shifts focus to Ralph Fiennes’ diplomat character. It’s like starting over again with a whole new story and a whole new protagonist with whom to identify. But the mystery soon unfolds and the danger becomes more real, sending The Constant Gardener into thriller territory. Director Fernando Meirelles employs a lot of shaky cam and extreme close-ups to give the film a sense of reality and urgency, encouraging you to think of the film as a true story. Problem is, The Constant Gardener isn’t a true story, nor does it comment on any real-world crisis that I’m aware of. Knowing this, the whole endeavor just feels hollow and irrelevant. With Bill Nighy.