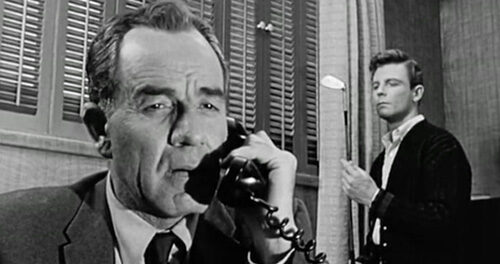 Grant Williams (The Incredible Shrinking Man) stars as a serial killer who goes to therapy about his dark compulsion. Turns out the guy has serious Freudian issues involving his mother, father, and sister — anyone who reminds him of them tends to get stabbed. The police are on the case, but can they stop him before his paternal-acting shrink becomes the next victim?

The Couch is a surprisingly tight little flick, almost film noir in its execution. I dug Frank Perkins’ jazzy score and the way all the killing scenes are staged. Williams’ character is pretty brazen. You rarely see murders like this performed in broad daylight, on crowded streets with lots of potential witnesses. And when he finds out one of his victims survived their initial stabbing, it’s pretty fun to watch the lengths Williams goes in order to correct that mistake. At one point, the doctors in the operating room are literally looking over their shoulders, asking, ‘Who is this guy?’

With Shirley Knight, Onslow Stevens, and a script written by Robert Bloch (Psycho), based on a story by Blake Edwards (Victor Victoria).