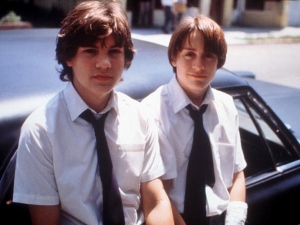 Emile Hirsch and Kieran Culkin put in great performances in this odd coming-of-age film about best friends who are constantly rebelling against their Catholic school teacher, a one-legged nun played by Jodie Foster. I like that the characters, even Foster’s antagonistic one, aren’t one-sided. The film suggests the boys are out of control, but also that they have plenty to rebel against. I expected a moral judgment to be made one way or the other by the time the movie ended, but despite a hefty dramatic turn in act three, the film really isn’t interested in passing judgment. The film may leave you tonally and thematically confounded, or you might find it refreshing. Jena Malone and Vincent D’Onofrio co-star, and Todd McFarlane (creator of Spawn) brings the characters’ comic book creations to life in several animated sequences.