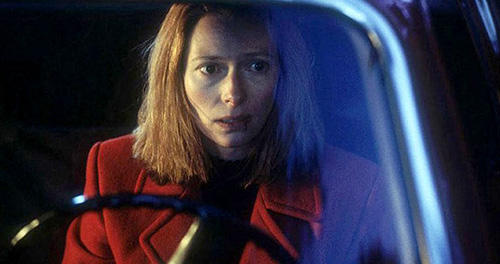 Tilda Swinton stars as a mother trying to cover-up the accidental death of her son’s aggressive gay lover. But things get even more complicated when a strong-arm (Goran Visnjik) tries to extort the dead man’s debts from her.

Tilda Swinton can make the best of a lot of roles, but this character’s timidity and fecklessness are hard for me to deal with. Since the death was completely accidental, I never bought into the need for her to hide the body or any evidence that the death happened on her property and might incriminate her son. (Maybe I have too much faith in our justice system?) I also don’t care for the way the son (Jonathan Tucker) constantly disrespects and belittles her. Between the way he and Visnjik’s character constantly antagonize her, I really wanted to see Tilda grow a pair, open a can of whoop-ass and take this movie in a completely different direction.

The Deep End is designed to be a dramatic thriller. I suppose if I didn’t have so much trouble respecting the main character’s decision-making, I might otherwise enjoy the thriller aspect of the movie. Instead, I found myself thinking during the third act, “None of this would have happened if your dumb, spineless ass would have just called the police.”

With Josh Lucas and Peter Donat.