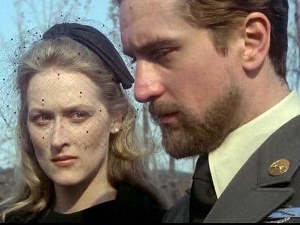 Close-knit friends from a mining community share a harrowing experience during their tour of duty in Vietnam. Michael Cimino’s three-hour long film focuses primarily on the aftermath of the ordeal, now one of the most famous scenes in movie history, a deadly game of Russian roulette forced upon prisoners at a POW camp. Robert DeNiro plays the most level-headed friend, who tries to help buddies John Savage and Christopher Walken resume their normal lives. The cast is top-notch, including supporting turns by Meryl Streep and George Dzundza. Vilmos Zvigmond’s cinematography finds beauty not just in Vietnam and the Pennsylvania mountaintops, but also in the dingy, soot-covered town the characters proudly call home. Cimino’s film is moving without being sentimental and paints a very warm picture of a hardworking, hard living community. My only problem with the movie is the pacing. The first hour, featuring a wedding ceremony, goes on too long and the Vietnam sequence isn’t long enough. The film won Academy Awards for best picture, director, editing, and sound. Christopher Walken took home the Oscar for best supporting actor.