William Dieterle's adaptation of Stephen Vincent Benet's The Devil and Daniel Webster is a winning combination of rustic Americana and dark fantasy. A cautionary tale of greed and power, the narrative centers around the character of Jabez Stone (James Craig), a down-on-his-luck farmer who is barely able to support his family in 1840s New Hampshire. When the nefarious Mr. Scratch (Walter Houston) appears during a moment of weakness, Jabez agrees to sell his soul in exchange for seven years of good luck.  Much to the dismay of his wife (Ann Shirley), mother (Jane Darwell), and beloved politician Daniel Webster (Edward Arnold), Jabez slips into a downward spiral as a result of his newfound wealth and power.  When his seven years are up, Jabez learns the error of his ways and wants to make amends. To escape his contract with the Devil, Jabez puts his fate in the hands of the almost mythic Daniel Webster, who represents him in a climactic barn room trial against Mr. Scratch and a jury of the damned. 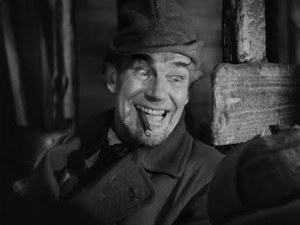 In line with the movie’s socialist attitudes, Jabez must give himself back to his community in order to save his soul.  Daniel Webster implores Scratch’s jury of the damned to remember their American roots, claiming that “we planted freedom in this earth like wheat” and that Jabez’s soul “doesn’t belong to him alone, but to his family and his country”.  If the movie’s political ideals are lost on anyone, Mr. Scratch informs us all in the film’s final moments. Walking away from Jabez’s farm, Mr. Scratch notices the camera’s lens and looks directly into it. He smiles, cocks his head, and points to the audience – looking just like Uncle Sam. But to dwell too much on the political and moral agenda of The Devil and Daniel Webster is to deny the beauty of its simple Faustian storyline – one of man overcoming adversity, finding comfort in family, building strong communities, and doing the right thing.  It flows beautifully and lyrically, and if it fits the context of any socio-political agendas it does so with the subtlest effort.

The film features elegant direction, incredible performances, innovative camera work, and stylish mise-en-scene. Dieterle infuses the film with stark contrast lighting and masterful compositions rich in detail and multiple layers of action. Influenced as Citizen Kane was by German expressionist films, The Devil and Daniel Webster features bold, suggestive lighting — coming from behind to suggest a ghostly netherworld, or even below to suggest the fires of Hell. Every shot in the film, even in the mundane world, seems painstakingly planned and executed, with decisive lighting and many intricate camera movements. It’s a gorgeous film.

The most remarkable performance in the film is Walter Houston’s Mr. Scratch. Houston, an Oscar-winner for his role in The Treasure of the Sierra Madre, exudes unbridled glee with every devilish grin. His Devil is a gentleman-like puppet master, a smooth talker, and very persuasive. Houston throws away one-liner after one-liner, owning the screen and stealing the show. At one point, he offers to help Daniel Webster win the presidential election. Webster replies, “I’d rather see you on the side of the opposition.”  As Webster walks away, Houston replies, “Oh, I’ll be there, too,” and sticks a cigar in his mouth.

To combat the devil, Dieterle cast Edward Arnold (who was actually recast when the original actor was injured during filming). Arnold had a tough job in the film, making believable not only Daniel Webster’s mythic stature, but also his flowery rhetoric about patriotism and the goodness in all men. He admirably succeeds in not only persuading the jury of the damned, but in holding his own against Walter Houston in their many scenes together.

Everyone else in the cast is also excellent. James Craig pulls off Jabez Stone’s fall from grace, and Ann Shirley is a believable virtuous wife. Jane Darwell, fresh off her Oscar-winning stint as Ma Joad in The Grapes of Wrath, seems to be playing the same character in The Devil and Daniel Webster, but it serves the movie well. The most notable supporting player is Simone Simon, whose mesmerizing Belle — a nanny sent from Hell by Mr. Scratch to help Jabez raise his son — haunts every frame in which she appears.  It’s easy to see why Jabez would fall under her spell, because we, as an audience, do as well.

The icing on the Devil‘s cake is Bernard Herrmann’s Oscar-winning score, a dynamic one that works on many levels.  Herrmann incorporates several traditional folk songs into his original music, and manipulates the sound of telephone wires “singing” in the wind to create an eerie, atonal sound for the netherworld. The film also provided Herrmann a wealth of other opportunities, including a square dance and two lullabies.

A good story makes a movie worth watching once. Exquisite aesthetics makes it worth watching many times. The Devil and Daniel Webster stands the test of time as an endearing narrative. It’s masterful direction and style, fluid editing, and charming performances make it an accessible and entertaining film for any audience.