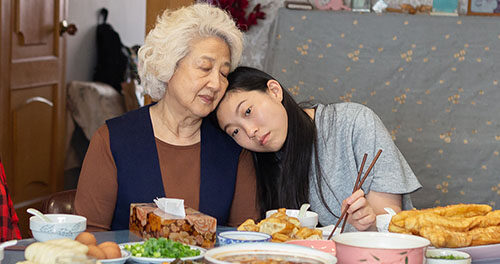 In this ensemble drama from writer/director Lulu Wang, Awkwafina (Crazy Rich Asians) plays a New Yorker who learns her grandmother in China is dying. But only the family knows — grandmother does not. The extended family comes together at the grandmother’s house for an impromptu wedding to spend time with their beloved matriarch before she is gone. While Awkwafina struggles to keep a brave face, her family try to demonstrate to her why the secrecy is necessary.

The Farewell is a serious story, but there’s a healthy amount of humor and charm in the film. This is the first Lulu Wang film I’ve seen and I was impressed with her sure-handed direction and confident staging of camera and cast. Awkwafina and Zhao Shuzhen, as the grandmother, give solid performances. I was also impressed with Diana Lin as Awkwafina’s mother. The screenplay threatens to lose narrative momentum at times, but is able to achieve a few well-earned, emotionally palpable moments. Wang never resorts to easy sentimentality. She succeeds in creating a caring, thoughtful meditation on death that raises a question we will all deal with sooner or later — who should carry the burden of grief?