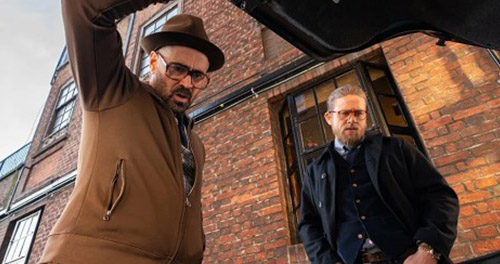 Matthew McConaughey plays an American marijuana dealer looking to sell his lucrative British production and distribution system. But when one of the bidders sabotages him to drive down the value, everyone has to watch their backs. Charlie Hunnam co-stars as McConaughey’s right-hand man, and Hugh Grant is featured as a smarmy, investigative screenwriter who attempts to blackmail them.

The Gentlemen is a twisty-turny crime dramedy from writer/director Guy Ritchie (Snatch, Lock Stock and Two Smoking Barells). I usually perceive him to be a low-rent Tarantino knock-off. And thirty minutes into The Gentlemen, my low opinion hadn’t changed. But slowly and surely, once the overly-complicated plotting gave way to characters with personality, The Gentlemen won me over. Colin Farrell’s supporting turn as a moralistic bad-ass who mentors troubled teenagers goes a long way in swinging my favor. Michelle Dockery (Downton Abbey) is also memorable as McConaughey’s tough-but-sexy wife. The screenplay and direction are indulgent at times, and Ritchie’s affinity for the word “cunt” may catch you off-guard. But if you stick with it, The Gentlemen has some fun reversals and performances, and pays off in the end.