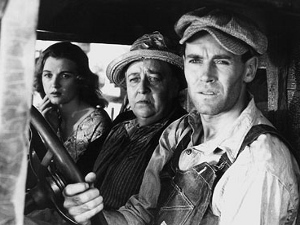 John Ford directs John Steinbeck’s Pulitzer Prize-winning tale of a destitute Oklahoma family who pile everything they own into a jalopy and head for California in hope of finding work and a new home. The Grapes of Wrath puts an exclamation point on stories about the Great Depression and the down-trodden. The film features a stellar cast, gorgeous photography by Gregg Toland, and enough earnest regard for the plight of the working class to maintain its relevancy three-quarters of a century later. Henry Fonda turns in a career-defining performance as Tom Joad, a man just released from prison who finds his entire family has been thrown off their farming land by the banks. He’s just in time to join them on the road west, but the journey is a treacherous one and not all of them will live to see the California border. And once they arrive, one hope after another is dashed, as greedy fruit farmers and local police take advantage of the Dust Bowl migrants, with sometimes deadly results.

Fonda’s climactic monologue, where he vows to fight for hungry and abused is one of the greatest in film history. It marks the end of a dramatic character transformation, from lone ranger to community leader. The Grapes of Wrath is a deeply humanist film about the importance of family, fairness, and dignity. Fonda is backed up by phenomenal performances from Jane Darwell as Ma Joad (who won the best supporting Oscar for her role), John Carradine as a fallen preacher who inspires Tom, and Charley Grapewin as Grandpa Joad, a character driven to hysterics by the thought of leaving the only place he’s ever called home. John Ford won his second of four directing Oscars for the film.