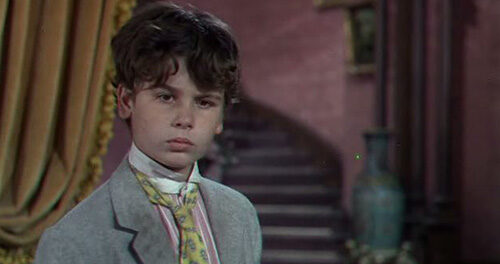 Thirteen-year-old Dean Stockwell (Kim, The Dunwich Horror) stars in this turn-of-the-century coming-of-age flick about a mischievous boy who mellows after years of preparatory school. Stockwell plays “Dink” Stover, who in the first act of the film is responsible for painting a horse green and blowing up a classroom before his family send him to a strict all-boys school where he quickly makes enemies of a teacher (Leo G. Carroll) and a fellow student (Darryl Hickman).

The Happy Years is an episodic tale that takes us through a rough year at Dink’s school, then a shenanigan-filled summer break, and finally a second, more reconciliatory school year. Stockwell’s smart alec but charming performance keeps you engaged as the overarching storyline makes itself apparent. In an organic, not-didactic way, the film becomes about Dink’s maturation as he starts to understand and befriend his old adversaries.

Director William Wellman (The Ox-Bow Incident, The Public Enemy) shows his sensitive side with this kind of story. Though a preparatory school may seem far removed from Wellman’s war epics like Wings, Battleground, and The Story of G.I. Joe, you’ll find the same themes of supportive, nourishing homo-social refuge in The Happy Years. But the film stands apart in the director’s filmography for its decidedly family-oriented humor and charm. Highlights include Dink and his friends calling upon the same young lady in rapid succession, and a pancake eating challenge that will win the entire school free pancakes for a day if one of the boys (Donn Gift) can eat 32 flapjacks in one sitting.