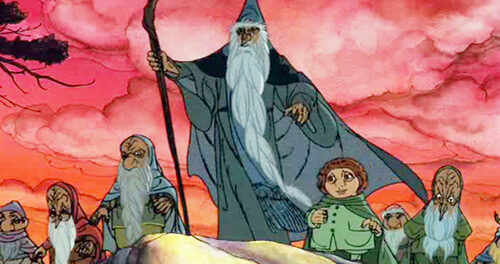 This American/Japanese animated venture would be the first feature-length movie journey into J.R.R. Tolkien’s Middle Earth. Produced by Rankin/Bass (Rudolph the Red-Nosed Reindeer, The Last Unicorn) and animated by the studio that would later become Studio Ghibli, The Hobbit is a brisk 77-minute adaptation that features many folksy songs and a notable voice cast led by John Huston as Gandalf.

While it may be a little rough around the edges and stylistically old-fashioned, I still find this cartoon a bit charming. The storytelling is too rapid for adults, but perhaps the right pace for young children. The animation is a little crude for my taste, but I really like the character designs and some of the vocal performances, particularly Richard Boone as Smaug the dragon and performance artist Theodore as Gollum. Some of the music is catchy, but some of it is annoying — especially when Glenn Yarbrough sings the main title song, “The Greatest Adventure” with enough vibrato to shatter glass.