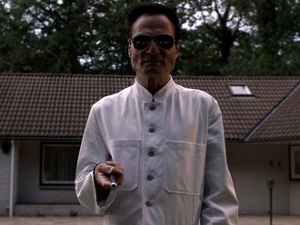 A demented German surgeon connects the gastro-intestinal tracts of two hapless American women and a Japanese man to create a ‘human centipede’ in this sick little horror flick from Dutch director Tom Six. The film is most horrifying before the operation, where the surgeon (played most creepily by Dieter Laser), gives his victims a slide show presentation of what he’s about to do with them. The thoroughness of his research and the practicality of the details are what frighten here — the cutting of knee ligaments, the removal of teeth, the grafting of skin — and then comes the profoundly disturbing sight of the completed experiment, three pitiable subjects conjoined ass-to-mouth.

But once you have a human centipede, what do you do with it? At the midway point, the film slides into standard thriller mode as the centipede tries to kill the surgeon and draw the attention of visiting police officers. The film could benefit from stronger protagonists. The two women lack any character or personality, and the actresses playing them are barely passable. The Japanese man, as the front half of the centipede, has the opportunity to fight and argue with the surgeon. His character is more interesting, but the film doesn’t take advantage of this until late in the game. Dieter Laser’s portrayal of the surgeon is the best reason to see the movie — he fleshes the character out in subtle reactions and controled deliveries, giving a truly disturbing performance.

Human Centipede is being heralded as the sickest shit ever put on film, but the concept is far more disturbing than how it’s executed.