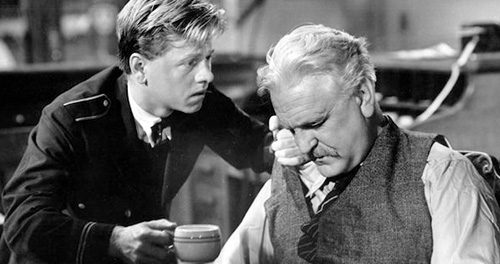 Mickey Rooney headlines this slice-of-life picture about a New York town maintaining the home front during WWII. Rooney plays a highschooler working as a telegram delivery boy to help provide for his family while his older brother is in service. James Craig (The Devil and Daniel Webster) plays Rooney’s employer, who is also a surrogate father to Rooney’s character. (Rooney’s deceased father actually narrates the opening and close of the film.) Frank Morgan (The Wizard of Oz) plays an older coworker who refuses to retire.

The film takes narrative departures into Craig’s love life, the grade school adventures of Rooney’s little brother, a movie theater date Rooney’s sister has with a friend and some GI’s, and his older brother (Van Johnson) bonding with a fellow soldier on the warfront. But Rooney anchors the film and it’s through his eyes that we primarily experience the story. It’s probably the most grounded and effective performance I’ve seen from Rooney. The relationship between Rooney and Morgan is my favorite in the film, especially when Morgan explains what to do when Rooney finds him drunk at work. Mary Nash is also memorable as a stern teacher who keeps Rooney after school for acting out during class, but privately roots for him from her school room window when he wins a school race that same afternoon.

The Human Comedy plays like a nostalgia movie, even though it was made during the time it represents. I love the old, small-town values on display throughout the film. Everyone in town knows each other and they come to each other’s aid whenever needed. One of the most affecting scenes is when Rooney has to deliver a telegram from the Army to a mother, notifying her that her son has died in combat. That heavy burden is echoed later on in the film, during a dark but moving moment between Rooney and Morgan.

As much as I enjoy the cast and the film’s encouraging outlook at life during the darkest of times, the screenplay does get overly maudlin at times. I could do without the late father’s narration, the specter of deceased characters watching over Rooney at the end, and the not-so-subtle ethereal light that washes over him during a moment of clarity. But I can overlook those aspects of the movie and hold onto the parts that resonated with me. The Human Comedy is a pleasant reminder that we weren’t always so jaded and cynical. We used to do the right thing, and our values used to mean something.