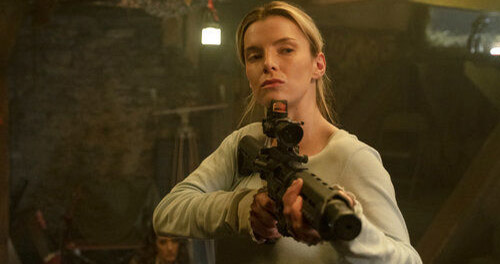 Elitist liberals hunt and kill redneck conservatives in this satiric take on The Most Dangerous Game. Betty Gilpin heads up the cast as our hunted protagonist (the horror genre’s ‘final girl’, if you will), while two-time Oscar winner Hillary Swank leads our pack of villainous hunters. Gilpin’s droll, reticent, but kick-ass performance reminds me of an old Clint Eastwood anti-hero. We never quite know who she is or where she came from, but she commands the screen and truly carries the movie.

The Hunt is a cocktail of dark comedy and gory horror that works for the most part. The lampooning of liberal and conservative stereotypes made me laugh for a while, but wore thin as the film went on. I was glad to see the jokes subside once the third act becomes a two-woman ass kicking showcase.

If you’re afraid of seeing a movie that tackles our political differences in such an extreme fashion, don’t be. The Hunt makes fun of everyone and might even have a worthwhile message about how perception begets reality. With Amy Madigan, Ethan Suplee, and Wayne Duvall.