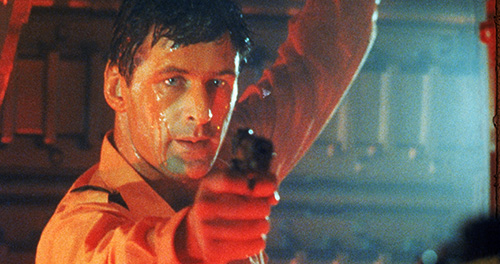 Alec Baldwin takes on the mantle of Tom Clancy’s Jack Ryan in the action-thriller The Hunt for Red October. One of the joys of this movie is seeing Baldwin, previously known mostly for co-starring in Beetlejuice, become a leading man before your very eyes. And a smart one, at that. Sharing the screen with him is Sean Connery as a Russian captain whose new state-of-the-art submarine, Red October, is discovered headed toward the United States. Both the Russian and U.S. governments freak out as everyone tries to figure out whether Connery is defecting or trying to start a war.

Director John McTiernan, hot off Die Hard and Predator, does his most compelling work here. You will never see another film shot in a submarine environment that captures so many different angles and camera movements. He and director of photography Jan de Bont (Speed, Basic Instinct) provide a masterclass on how to shoot in small spaces with an enormous ensemble cast.

And, man, is that cast ever something. Sam Neill plays Connery’s sympathetic right-hand man, while Tim Curry plays a more skeptical doctor. Scott Glenn and Courtney B. Vance are memorable as officers on a U.S. sub tracking the Red October, while James Earl Jones lends his gravitas toward the role of Jack Ryan’s commanding admiral. Stellan Skarsgård is on hand as an enemy Russian sub captain, while Joss Ackland and Richard Jordan bring some tongue-in-cheek humor to the film as the politicians engaged in representing their rival nations. In terms of filling a cast roster with stunning talent up and down the line, The Hunt for Red October is hard to beat.

The Hunt for Red October is the antithesis of today’s Hollywood action movie. It’s not over-produced or self-indulgent. It doesn’t rely on arbitrary, intermittent explosions or action set-pieces to hold your attention. It’s just good storytelling, performed by a fine cast and a director at the top of his game.