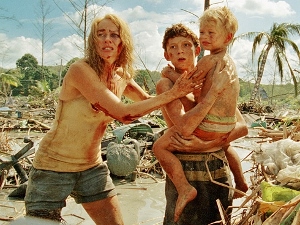 Naomi Watts and Ewan McGregor star in this harrowing true story about a vacationing family torn violently apart by the 2004 tsunami that ravaged Thailand. The natural disaster is recreated in the opening act, seen through the eyes of Watts’ character as she desperately tries to grab hold of her eldest son as the tidal wave sweeps them both inland. She’s thrashed, cut, and gouged by trees and sharp objects and spends the rest of the movie in ever-declining health. Meanwhile, Ewan’s character is in charge of their two younger sons, and has to make a tough decision about whether to stay with the boys or keep looking for his wife and oldest son. The oldest son is played by Tom Holland, and he holds his own with McGregor and Watts — all three give phenomenal performances, so prepare your waterworks. The third act gets just a tad too ‘Hollywood’ in its staging, but I appreciate the visual poetry that director J.A. Bayona (The Orphanage) incorporates. Overall, The Impossible is one of the most emotionally gut-wrenching and anxiety-inducing movies of the last few years. With Geraldine Chaplin.