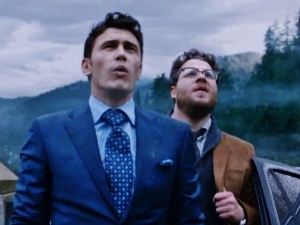 James Franco and Seth Rogen star as famous tabloid news producers who snag the interview of the century with North Korean dictator Kim Jong-un. Before they leave to snag the highest ratings of their careers, though, the CIA shows up with a favor — assassinate Kim Jong-un! The Interview is mild in comparison to other Franco/Rogen comedy pairings. It’s executed (by writer/directors Rogen and Evan Goldberg) more like an action-drama than a comedy, which makes Franco’s over-the-top antics stick out like a sore thumb most of the time. (He needed reigned in here.) Still, there’s something interesting about a film that tackles a contemporary news topic with such reckless abandon.

The Interview is never the laugh riot you want it to be, but there’s a smattering of puerile humor and some surprisingly violent shocks when you least expect them. It’s probably not the movie anyone is expecting, but I mostly dug it. Randall Park gives a solid supporting performance as Kim Jong-un and Diana Bang nearly steals the show as a turncoat toughie who has the hots for Rogen.

With Lizzy Caplan and a handful of uncredited cameo appearances, including Eminem, Rob Lowe, Seth Meyers, and Bill Maher.