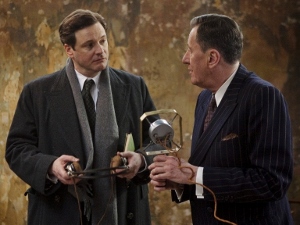 Colin Firth plays the stuttering King George VI, who never wanted to be king for fear of his speech impediment bringing shame to him and his family. The King’s Speech focuses on the antagonistic relationship between the king and his therapist, Lionel Logue, played by Geoffrey Rush, and culminates in a live radio speech the King gives on the eve of Britain’s declaration of war against the Nazis. Director Tom Hooper keeps the focus on the characters and makes the history backdrop for their growth and transformation.

I had trouble appreciating King George’s character. He’s so self-loathing, he borders on annoying for half the movie. But once he commits to improvement and drops the royal pretense around Logue, the movie started to work for me. The cast is a superb collection of talent, with Rush giving my favorite performance as the firm-handed Logue. Hooper and director of photography Danny Cohen frame the film like no other I’ve seen, keeping Firth’s character (and sometimes Rush’s) pushed to the edge of the frame for most of the runtime, as though the character is fighting for even the audience’s attention. The pressure of royal obligation is reinforced with extremely wide and low-angle views of architecture and spacious interiors. The delightful supporting cast includes Helena Bonham Carter, Guy Pearce, Derek Jacobi, Michael Gambon, Claire Bloom, and Timothy Spall as Winston Churchill.