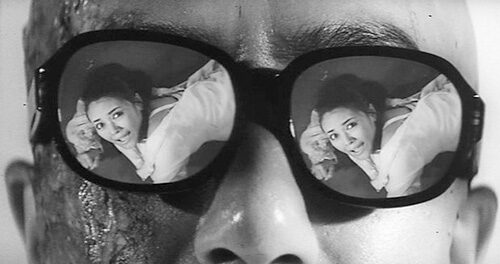 A young man and woman living under the care of a kindly priest get wrapped up in a series of seemingly supernatural murders. It turns out a group of modern-day pirates murdered the crew of a ship three years earlier, and now the victims’ skeletons are out for vengeance.

What’s great about The Living Skeleton is that the synopsis above is only the beginning. A little past the halfway point, this Japanese horror flick takes some delightfully wild turns. I was surprised to see doppelganger sisters, secret identities, elements of old-fashioned ghost stories, mad scientists, and more — and all without the film feeling forced or disjointed.

Some of the special effects are hokey in a lovable kind of way — namely the bats on strings and woefully inarticulate skeleton marionettes. But this is otherwise a pretty gorgeous, black & white widescreen horror flick that keeps you guessing. Noboru Nishiyama’s very ’60s-sounding score is the icing on the cake.