The public will never let director Joel Schumacher live down his Batman movies, but let's not forget that before there were nipples on the Batsuit, there was The Lost Boys. A divorced mother brings her two sons to a coastal California town to live with their grandfather and make a new life for themselves. There's just one problem. The whole town is prey for a gang of vampires! 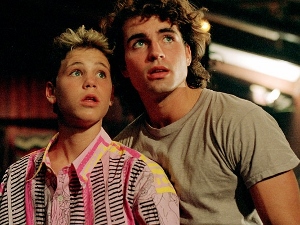 I think it’s Schumacher’s taste that made this movie what it is: the essence of cool. The cast is terrific, anchored by the alluring Jason Patric as the oldest son and Kiefer Sutherland as the leader of the blood-suckers, with endearing supporting turns by Dianne Wiest, Edward Herrmann, and Barnard Hughes. Even the Coreys (Haim and Feldman) are good in this movie (this is before they became druggies). Schumacher is a meticulous visual stylist, so the costumes, production design, and cinematography are also top-notch.

I think another reason this movie is so well loved is because it plays into so many kinds of wish fulfillment, especially for young people: finding new friends, joining a gang, staying up late, roaming the pier, partying on the beach, riding motorcycles into the night, wearing cool clothes, living in an underground hideout… This is the very height of escapist fare. The screenplay weaves all these elements together, then gives us a satisfying showdown (the stand up and cheer kind) and a perfect ending. Then there’s the awesome soundtrack, one of those rare collections where there isn’t one bad song.

Honestly, the movie had me with the first few notes of “Cry Little Sister”.  After that, it’s just layers and layers of icing on a cake I could eat forever.