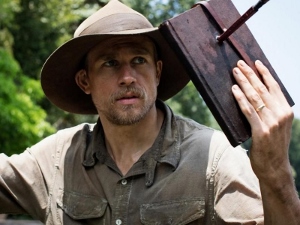 Just when I thought good old fashioned escapist adventure storytelling was dead, along comes The Lost City of Z. This movie renewed my faith in movies. I was beginning to think I’d seen the end of grand, romantic films like those directed by Peter Weir or David Lean, but James Gray (The Yards, We Own the Night) picks up the mantle and delivers a film like we haven’t seen since the ’80s. If you feel about two decades out of place, you might enjoy it as much as I did.

Charlie Hunnam (Pacific Rim, Sons of Anarchy) stars in the true story of British Colonel Percival Fawcett, who was summoned by the British government to explore South America at the turn of the century. After finding initial evidence of a lost civilization, Fawcett returns to the jungle time and time again, hoping to bring back incontrovertible proof of his discovery. It becomes a life-long obsession. Much of the film focuses on the expeditions — snakes, cannibals, deadly illness, and all — but it’s fairly balanced with scenes from Fawcett’s home life, with Sienna Miller making the most of her role as Nina Fawcett. Miller gets to play both a women’s rights advocate and a deeply concerned wife/mother. A scene in which she tries to convince Percival to bring her with him to South America is among the film’s most memorable.

Later in life, as Percival is beginning to let his life-long obsession go, his eldest son (Tom Holland) reignites the spark. Nina is at first reluctant to let her family go off again into the far-off wilderness, but ultimately she tells him, “A man’s reach should always exceed his grasp, or what’s heaven for?” It’s a haunting sentiment that I carried with me after the film ended. It may justify a dangerous obsession, but it also gives us license to aspire, consequences be damned. Unfortunately, Fawcett and his son both disappeared in the jungle in the 1920s. The film’s final act does a remarkable job being faithful to the mystery, while also giving us a few potent possibilities to consider. James Gray’s direction gets increasingly lyrical near the end — suggesting our protagonist has no regrets about reaching so high. I found the ending equally bittersweet and inspirational.

Hunnam may not be the strongest actor to carry this movie, but he’s goddamned sexy to look at and this is probably his strongest performance to date. He certainly doesn’t hurt the movie. Robert Pattinson is also a stand-out, burying himself in the role of a gruff, drunkard fellow adventurer. Angus Macfadyen and Ian McDiarmid are memorable in other supporting roles. Darius Khondji’s cinematography is beautifully composed and lit, though he pushes the digital color grading a bit much for my taste. Christopher Spelman delivers a sweeping score. Based on the book by David Grann.