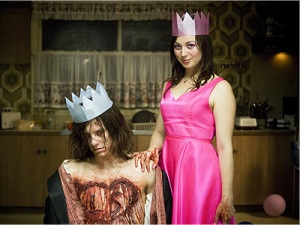 Half-way through The Loved Ones, I was hating it all over. The fact that it won me back impresses the shit out of me. It’s an Australian horror flick about a hapless teenager struggling with survivor’s guilt (Xavier Samuel) who gets kidnapped by a spoiled, sadistic classmate (Robin McLeavy) and her whipped father (John Brumpton). Once tied to a chair beneath a spinning disco ball and other prom paraphernalia, the boy is forced to endure the girl’s own private prom from Hell.

Solid acting all around, beautiful cinematography, and a great soundtrack. It was a rollercoaster experience that ultimately surprised me. I hated it and I loved it. Most importantly, it really got to me. How many movies do that anymore?