Hellraiser fans rejoice. This is the best Clive Barker movie in twenty years. Director Ryuhei Kitamura hits the nail on the head (or the meathook through the ankles) in his handling of the story, which centers around an urban photographer (The Hangover's Bradley Cooper) in search of brutal subject matter. He finds what he's looking for after stalking a stern-looking butcher onto a subway car late one night. As Cooper's character and his girlfriend (Leslie Bibb) begin to connect the mysterious butcher to a series of missing persons reports, they fall head-first into some supernatural shit that will change their lives forever. 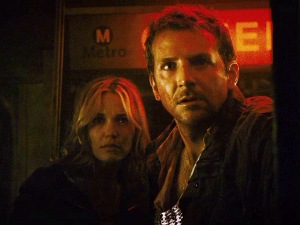 Despite its exploitation-style title, The Midnight Meat Train is beautifully-made, purposefully-paced, and attentive to character, tone, and atmosphere. My only gripe is Kitamura’s decision to go with so much computer-generated blood and gore. But at least there is blood and gore! This is a film that definitely embraces its R-rating and delivers a hefty dose of juicy carnage. It’s also quintessential Clive Barker:  psychosexual, otherworldly, mythic, and tragic as all Hell. I adored Barker’s books when I was growing up, so it was a thrill to be enveloped in that dark and sticky atmosphere again. With Vinnie Jones and Brooke Shields.