Harrison Ford gives one of his best performances as Allie Fox, an obsessed inventor who moves his family to a Central American jungle to escape what he perceives to be the end of American civilization. Peter Weir (Witness, Dead Poets Society) directs from a screenplay by Paul Schrader (Taxi Driver, Raging Bull), based on the novel by Paul Theroux. We experience the story through the eyes of Fox's eldest son, Charlie (River Phoenix). Charlie begins the film in awe of his father, but as Allie spirals out of control, putting his family in danger and developing a serious God complex, Charlie begins conspiring with his mother (Helen Mirren) to save the family from their patriarch. 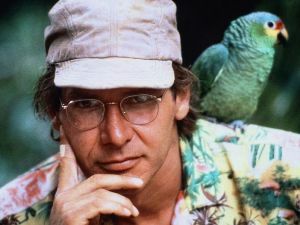 The tension in The Mosquito Coast comes from the love Allie’s family feels for him, versus their need to escape his increasingly irrational resolve. Do they escape this man who loves them and believes he is saving them from certain doom? Would they even kill him for a chance to go back home? My favorite scenes are ones where Allie squares off against an overzealous missionary (Andre Gregory), who like Allie, also seeks to gather and control his flock. Great cinematography from John Seale (Oscar-winner for The English Patient) and a hypnotic score from Maurice Jarre. Look for Butterfly McQueen (Prissy from Gone with the Wind) and Seinfeld alum Jason Alexander in small roles. With Martha Plimpton.