Jim Carrey stars as a man who discovers a book that he believes is about him, sinking him further and further into a murder mystery that proposes the killer is, quite literally, the number 23. Carrey is good and director Joel Schumacher's (A Time to Kill, Flatliners) direction is taut, if a little too hyper-stylized for the material. I don't put stock in numerology, so the first half of the film strains my suspension of disbelief. Fortunately, Fernley Phillips' script makes a one-eighty after the mid-point and I found the last half much more engaging than the first. (I won't give any direct spoilers, but it's a lot like A Beautiful Mind in its narrative structure.) Cinematographer Matthew Libatique (Requiem for a Dream, Black Swan) serves up high-contrast lighting and a palette of deep colors to reinforce Schumacher's melancholy tone, while Harry Gregson-Williams' score plays counterpoint, adding a sense of wonder and urgency. 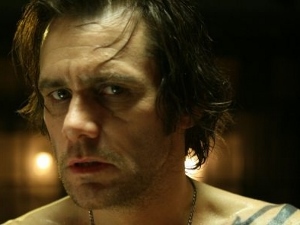 I appreciate that The Number 23 is unusual and unpredictable (I knew nothing about it before seeing it), but the plotting is forced, making the filmmakers’ sleight-of-hand more pretentious than it ought to be. With Virginia Madsen and Logan Lerman.