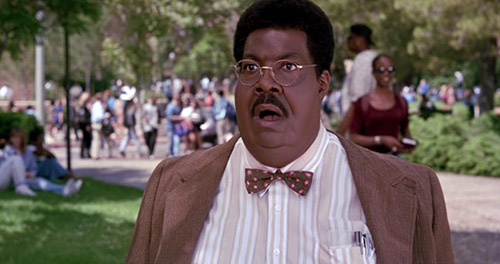 Eddie Murphy plays an overweight professor who invents a potion that sheds the pounds in a dramatic fashion. Problem is, the transformation also comes with a personality change of Jekyll and Hyde proportions. Murphy thinks he needs the potion to court a young teacher played by the beautiful Jada Pinkett, not realizing that the new alter ego plans to vanquish the professor’s fatter, friendlier personality forever.

The key to making a successful comedy star-vehicle is a script that doesn’t confine the star — it has to give them room to breathe. To that end, this remake of Jerry Lewis’ comedy classic works. Is the script formulaic? You betcha. And the love story is schmaltzy, too. But that’s when it’s up to the star to make the difference, and Murphy definitely elevates the material with his manic energy. Highlights include a hilarious opening during which gerbils and hamsters escape a college lab and wreak havoc throughout campus, and two family dinner scenes in which Murphy plays not just the professor, but also his mother, father, brother, and grandmother.