When I heard Shane Black (Kiss Kiss Bang Bang, screenwriter behind Lethal Weapon) was directing and Fred Dekker (The Monster Squad) was cowriting, I thought The Predator would have the right ingredients for a successful relaunch. I don’t know to what extent studio interference played a part, but if I were Black or Dekker I would have had my name removed from this film before it was ever released.

It is one of the worst studio films in decades.

Let me try to summarize the bullshit storyline: A bad predator comes to Earth and a military dude steals his helmet. So the predator tries tracking down the helmet, which falls into the hands of the military dude’s young autistic son. Meanwhile, the military dude teams up with a bunch of military mental patients, and a female scientist falls in with them, and then a really tall but good CGI super-predator comes and wants to fight the regular-sized predator. And they all need to find one of the predator’s ships for some reason. There’s something about predator/human hybrids, but it doesn’t go anywhere. The big predator ends up wanting the autistic boy. Fuck, I give up. I don’t care what it was about. I’m just glad it’s over.

The pacing is whiplash inducing, reminding me of a Zack Snyder suckfest. The involvement of the little autistic boy in a Predator franchise film was dumb, dumb, dumb — stupid-as-fuck dumb. Way too Lifetime movie of the week. Plus, the kid’s autism comes and goes as needed for the storyline. And apparently autism makes you able to figure out predator technology. Then there’s the cast. I recognized Peele from Jordan and Peele, and Thomas Jane was in the movie, too. I didn’t recognize anyone else. The cast is overflowing with nobodies — like Black found them all at Walmart in the middle of the night and gave them the parts without any kind of scrutiny. No one leaves a mark. They’re all playing Dukes of Hazzard-style broad caricatures. The score is overwrought and old fashioned in the worst way possible. And did you know this was a Comedy? The humor is so pervasive, that when characters try to do noble things, it comes off as cheesy. And when they die, you just want to laugh. Death scenes are literally hilarious in this movie. And then there’s eyeball rolling utilization of autism and global warming. Man, I could go on and on and on. There’s literally NOTHING good about this movie. Not the sets, the wardrobe, the music, any acting, nothing. It’s K-Mart bargain basement bullshit. It’s not even shit. It’s the shit that shit shits.

Oh, and the predators have dogs. They’re not mean and scary dogs — they act like puppies and the good guys befriend one of them. And the dogs have dreadlocks, too.

The dogs have dreadlocks, too, you guys.

And every time I might have even tried to start taking the movie seriously, those dogs show up again. And again. The movie is pretty much all about those stupid dumb-as-fuck-looking dogs. With dreadlocks. THE DOGS HAVE DREADLOCKS. I tried finding a picture of these dumb-ass dogs to share here, but Fox is wise to keep them off the web.

I just can’t even with this movie. I haven’t disliked a movie so much since Man of Steel. But this movie is even worse than that screaming turd. It’s almost so bad, it’s good. With it’s horrible one-liners, misplaced comedy, and juvenile action, I wouldn’t be surprised if it turns out to be the next Troll 2.

I’m still reeling from just how awful The Predator is. I may never get over it. 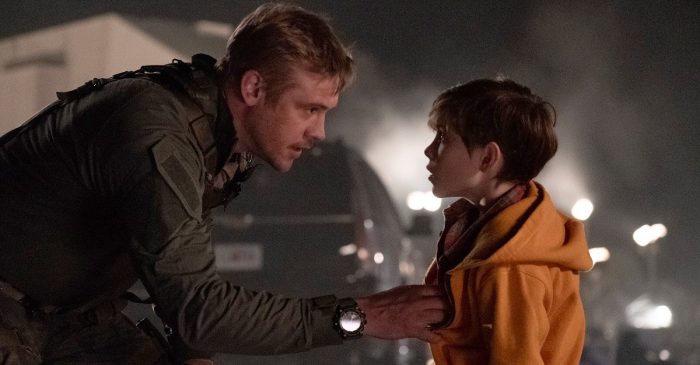 What is this father/son bullshit doing in a Predator movie?!?!